Pearl Harbor - Your Point of View is Important Recently, I had the opportunity to revisit Pearl Harbor. It had been some sixteen years since I was last there and very little has changed. It is a well-maintained memorial to our fallen heroes and the tragedy that occurred there on December 7th, 1941 at 7:55 AM. I will tell you it seems to me each time I have visited I have come away with a different perspective of the tragedy. I discovered I wasn’t the only one.

Visiting the book shop there I was overwhelmed by the great number of books about the event. Bookshelves full of books stand in place covering a large portion of the gift shop. Judging by their titles, each approaches the event from a different viewpoint. Most cover the actual attack. Being able to look back on it and the additional knowledge gathered over the years provides the writers of today with an insight many did not have. The shock of such an attack happening on US soil overwhelmed many and made it hard to be objective early on. Many have taken a second look, see more and can deal with more of the stories. 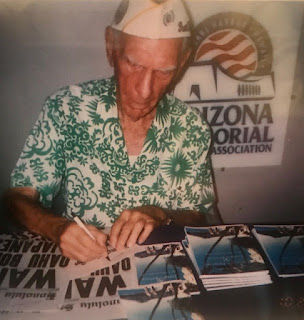 One book I found great interest in was one written by Rodney T. West, MD. Honolulu Prepares for Japan’s Attack, May 15, 1940 to December 8, 1941. I had the good fortune of meeting Dr. West in 2003. He was doing what writers do, signing his book at the Memorial site, and taking time to speak with each of us. Dr. West had served on several committees preparing for the possibility of such an attack. He shared with me even with all the preparation, they were overwhelmed. He said he could not imagine how things would have gone without the preparation and planning they had in place. Dr West’s title of his book gives a definite timeline.

Preparation was some 18 months but on December 8th it was over. It then became time to recover and rebuild. Dr West died in March of 2008. Well known on the island for his service to the community as a veteran and MD he had one other note of fame prior to death. During the Obama Presidential Campaign his name was brought to light as the Dr who delivered Barack Obama. Dr West touched history a second time. The conspiracy continues to be debated.

I hope writers when writing about a known event realize there are many  different viewpoints. Many are different. If you think yours is important, most likely it is important to others. Don’t hesitate to share it with us all.