Thankful for Stan Lee a True Superhero, a Creative Writer 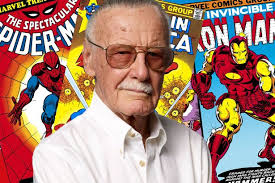 I heard of Stan Lee’s death from my daughter-in-law via text. She was understandably upset. She is the Marvel Superhero expert in our family. She participates in and attends Comic Con International conventions. She has expanded my limited knowledge in the field. It’s a joy to watch her talk about the experiences. To quote her, “He (Stan Lee) either created or co-created almost all of my favorite Marvel heroes.”

I’m in awe of the creativity of the mind of Stan Lee. Something I did not know was that Stan Lee “took over as Editor in Chief of Marvel Comics in 1941 at age 19.” Can you imagine? His rise to editor was a combination of talent but mainly due to historical events. At age 19, Lee worked in the mail room of Marvel Comics when most of the senior Marvel writers were going off to WWII. His appointment as editor forever shaped Marvel Comics future. He was a writer with an unlimited imagination.

Actor “Hugh Jackman, who benefited from Stan Lee’s writing, paid tribute to a man who had a massive impact on his career: Stan Lee. The actor and Late Show host Stephen Colbert shared kind words and memories of the Marvel Comics creator, who died at the age of 95 this week. ‘To the family and to the legions of fans, I remember Stan as a true gentleman who had this glint in his eye,’ Jackman said. ‘He’s a creative genius, he thought outside the box, he created a whole universe, he changed the lives of many people, mine included.’”

“Jackman recalled, ‘If you ever want to get a clear understanding of where you are in the world, and you think, ‘I’m Wolverine, I’m walking into Comic Con, this is my spot, right? This is a good day for me,’ I was on a red carpet and I was the only one on there and no one was taking my photo because at the other end was Stan Lee.’”

A recent article in Business Insider shows how world events contributed to Stan Lee’s creativity that equated to success for Marvel Comics. “Lee's time in the Army came just after the Japanese attack on Pearl Harbor. The Army installed the young Stanley Martin Lieber (Lee's birth name, he changed it to his pen name later) as a telephone pole lineman. After realizing it made a mistake, he was moved to the training film division to create posters and worked as a writer of films, shorts, and comics for the duration of the war. Throughout his life, Lee would use his experiences to influence his characters and his later works — and the Army was a small but significant part of it.” 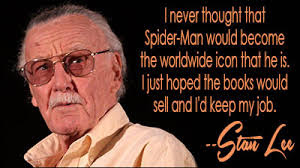 Clearly, Stan Lee’s fans are everywhere. Another fan was my local barista. The day after Stan Lee’s death, I placed an order in the drive through of my local coffee shop. After taking my order, the barista repeated my order and then said, “You’re a superhero.” I smiled and said “Stan Lee fan?” The barista replied, “Absolutely.” This random exchange makes me smile. It makes me want to explore the world of Stan Lee’s creation. What an author of immense creativity, who created worlds for us all to enjoy. Can you imagine a world without the stories of Spider-Man, the Fantastic Four, Hulk, Thor and the X-Men?

Thank you, Stan Lee. Happy Thanksgiving to you and yours!