Rubik's Cube and the Author Zone

By Connie Suttle
I never could get the hang of it—putting a Rubik's Cube to rights. I watched in envy as youngsters solved the thing in a matter of seconds. For me, there were always those pesky little squares of the wrong color stuck in the middle of all the squares of the right color. Eventually, I just gave up the idea that I'd ever get it right and gave away the cube I'd bought. I may have invested in a pet rock; after that I can't remember.

That was years ago. Yeah, I'm old. And young. At the same time. My body has tossed up its hands with a chuckle and given up. My mind, on the other hand, is infinitely young. Now, when I sit down to write, I sometimes stare at the screen while multiple plot lines, numerous characters and ideas for what happens next swirl through my brain.

Those screen-staring times make me realize that I didn't need to solve the Rubik's cube. I have my own version of it—in my head. Ultimately, it is more colorful, more interesting and ever changing. I like it so much better than I ever did that little cube. Settling each plot point or character into a specific slot gives me a great deal of pleasure. I go to bed with story-lines flowing through my mind. I wake up the same way. The cube never did that for me—it never obsessed me. It was merely a distraction—and eventually—a frustration.

What is the point of this, you ask?

I've already said the word—obsessed. What obsesses you? When whatever you're writing obsesses you, then you get it. The real reason any author writes. When you find yourself at dinner with friends, your eyes surely glazed over while the conversation between fictitious characters in your head drowns out the conversation at the table, you know you're obsessed. When you catch yourself staring at a movie screen, no longer seeing what is in front of you but the locales in your head where your plot takes a turn, you know you're obsessed. 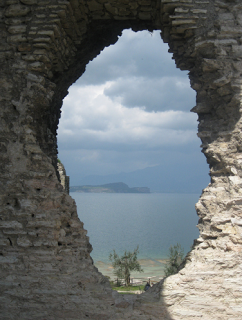 I guess you could call it the Author Zone. Maybe the Writing Zone. It doesn't matter, it just is. The more you write, the easier it is to fall into it; to slip past that two dimensional plane of letters on a screen or on paper, and fall into the rich, color-and-character filled alternate reality that is the story. There, fiction becomes real. After all, the more real the characters are to the author, the more real they'll be to the reader.
See words for what they are—a gateway.

Give into the obsession.

Connie Suttle, author of the Blood DestinySeries, the High Demon Series, Legend of the Ir'Indicti Series, the God WarsSeries and a woman of indeterminate years, has lived in Oklahoma all her life. She and her husband recently celebrated their fortieth wedding anniversary, and together they have one son and three cats. Should the cats be consulted, they will inform you (haughtily) that these humans exist to serve their every whim. Sadly, the humans in question are compelled to agree with that assessment. http://subtledemon.com/index.html     http://subtledemon.blogspot.com/ https://twitter.com/subtledemon  https://www.facebook.com/pages/Connie-Suttle-Author/220330094696864