Putting on a Happy Face

Car insurance is no laughing matter.  But watching today's TV commercials, one might think so.

There once was a time when insurance ads took their mission seriously.  However, in recent years, cavemen, gekkos, and perky girls in white uniforms have populated the advertising landscape.  Some are even accompanied by jingles as silly as Yahoo's.

The few remaining insurance companies who hung onto a shred of dignity have begun dabbling in humor as well, e.g. the "I am Mayhem" guy, or car owners suddenly speaking in the voice of the company spokesman.

The reason, of course, is because nobody really wants to buy car insurance.  So rather than approach reluctant customers with a stuffy message about premiums or a re-enactment of their next accident, why not make buying from them look like fun?  It's a brilliant tactic, really.

I should point out that the cavemen, while becoming famous enough to earn their own (failed) TV series, didn't sell a lot of insurance once they were overexposed and simply got on people's nerves.  The gekko is approaching that status currently, and if he doesn't crawl back under a rock soon, I predict a rival insurance company will do an ad in which a snake swallows a lizard whole.

That said, this same company wisely elects to diversify, with simultaneous campaigns involving rhetorical questions that end with Charlie Daniels playing a mean fiddle, or my favorite, "so-and-so is a real customer, not an actor. So we hired (celebrity)," who proceeds to interpret their testimonial in their own outrageous style. 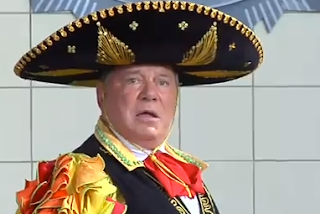 It isn't just insurance companies whose ads have gone from blah to better.  Want to know your credit score?  Me neither.  But an amiable young songster wearing a pirate hat might lure you in with his catchy ditty.

Doing an online search for the best deal on a Mexican cruise may not be our idea of a fiesta, but if Captain Kirk chooses to boldly go south of the border to entertain us, all I can say is, “¡Ay, caramba!”

Hopefully the books we write aren't such a drudge that it takes an over-the-top pitchperson to peddle them.  But in advertising, comedy is the new tragedy, so if you've written something along the order of The Complete Guide to Nursing Homes in the Northern Hemisphere, Betty White could be just the ticket.
_______________________________________

Have you gotten your free online copy of Southern Writers' anniversary issue yet? Get it now! http://www.southernwritersmagazine.com/july-gift.html