Thanksgiving: A Grateful Day from the Beginning

Special congratulations are in order to Amanda Stephan, winner of the "One Stop Shopping" Contest!
by Richelle Putnam 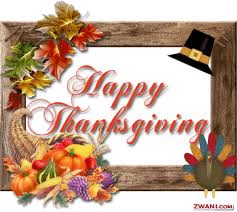 Happy Thanksgiving from Southern Writers Magazine!
For today’s special blog, I wanted to share some Thanksgiving facts:
DID YOU KNOW?
Spaniard Francisco Vásquez de Coronado and his men celebrated a "Thanksgiving" in 1541 while searching for gold in today’s Texas Panhandle.


Other feasts were held by French Huguenot colonists in 1564, by English colonists and Abnaki Indians in 1607, and in in 1610.

In October 1621, Thanksgiving dinner guests in Plimouth, () , included approximately 90 Wampanoag American Indian men and 50 English colonists.
For the Thanksgiving menu Colonists provided wild fowl, which probably included ducks, geese, and turkey, and the Wampanoag provided venison and Indian corn. However, other dishes most likely included fish, nuts, lobster, wheat flour, clams, pumpkin, peas, carrots and squash. While cranberry sauce probably wasn’t served because sugar was very expensive, the Native Americans used cranberries in various foods and also as a medicine to treat wounds. Potatoes and sweet potatoes (not a staple food) and pumpkin pie (couldn’t make the crust) were most likely NOT served.
In 1784, Benjamin Franklin suggested to his daughter that the wild turkey would be a more appropriate national symbol for the than the bald eagle.
In 1863, U.S. President Abraham Lincoln declared Thanksgiving Day a national holiday, but even before this date, George Washington, John Adams and James Madison had all issued proclamations encouraging Americans to observe thanksgiving.
In 1876, the American Intercollegiate Football Association held its first championship game on Thanksgiving Day.
In 1941 President Franklin Roosevelt established the fourth Thursday of November as the annual day for observance.
The above statistics bear evidence that Americans have been giving thanks since the country’s inception. Throughout my lifetime, I have shared many Thanksgivings with family and friends. Some are no longer with me, but I remain grateful for the time we had together and cherish the memories of past Thanksgivings with my grandfather and grandmother and my godson. I’m thankful for my husband, my children and my grandchildren and that we’re all healthy. I’m thankful for my writer family, especially my Southern Writers family. I’m thankful for my home, my community and my state.
And I’m thankful to be an American where giving thanks has been a tradition for hundreds of years.

After your fill of turkey, cornbread dressing, pumpkin pie, cranberry sauce and other delicacies of Thanksgiving, why not relax, grab pen and paper and jot down all the things you are thankful for today?
In fact, why not try doing that everyday? After all, giving thanks shouldn’t come only once a year!