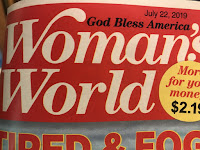 My goal for many years was to be published in Woman’s World Magazine. Not because they pay $800 for an 800-word romance, though I admit that’s more than wonderful. Not because they have a readership of 5.7 million, but what a heady experience to think so many people might read my words. My story! My name!

The real reason I’ve always wanted to be published in Woman’s World is because I like the magazine, I enjoy their positive stories—and I love a challenge. Think about it: WW writers have only 800 words to write a satisfying story with just the right touch of chemistry between the hero and heroine, including a witty banter or flirtation within a short beginning, middle and end. How hard can it be to leave the reader smiling? How hard, indeed.

I’ve read hundreds of WW romances. I’ve written and submitted dozens of stories. Since the editors don’t respond or send rejection slips, I never know how I’ve missed the mark. Am I making the same mistakes repeatedly?

Often, I try to be too different. My stories don’t have a logic to them. My characters don’t seem real. Can two strangers really fall in love within minutes of meeting? The answer is HOPE.

Here are a few things I’ve done to educate myself:

I’ve studied each published story.
I’ve analyzed each sentence and paragraph.
I’ve examined every verb.
I’ve marked sentences that describe emotions.
I’ve color-coded setting. How much is too much?
I’ve even typed out several published stories to get a feel for the flow and the amount of dialogue.

I still can’t tell you how to write one of these deceptively simple reads, but here are my three best tips:

Years ago, I stumbled across Kate Willoughby’s blog, Writing for Woman’s World Magazine. Kate, a bestselling author, reads every published story, blogs about it, and offers an analysis. She also teaches a course on writing for WW. I recommend it to anyone who’s serious about writing short romance. http://womansworldstyle.blogspot.com

Another excellent course is offered by award winning, multi-published author Tina Radcliff who has sold over three dozen short stories to WW. If you subscribe to her once a month newsletter for writers, you’ll get valuable writer info, as well as dates for her next class. http://tinaradcliffe.com

Last, join WW Writers on Facebook. Those of us who submit to Woman’s World—whether we get published or not—enjoy an encouraging fellowship. We’re friends who have a love for the magazine and a common goal. We celebrate each other’s success.

After my acceptance, my excitement became something akin to postpartum depression. My long-time dream had successfully come to an end. And then I realized that getting published once doesn’t mean automatic acceptance in the future. Selling to Woman’s World Magazine is difficult. The competition is fierce. There are many good writers still trying. I’m thrilled the challenge is still there because as crazy as it sounds, what’s fun about easy? 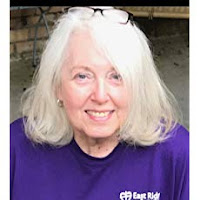 Jessica Ferguson is a former staff writer for Southern Writers Magazine, and the author of Save The Groom, The Last Daughter and The Groom Wore Blue Suede Shoes. Her work has appeared in a number of anthologies as well as magazines and newspapers in Louisiana and Texas. Summer Promise, her first short story to appear in Woman’s World Magazine, July 22, 2019. Hopefully, there will be more! Christmas in Love (three holiday stories) will release in late July. Keep up with Jess on Facebook, Instagram or by following her blog/website: http://jessicafergusonwriter.com