Did And Do They Have Pearls of Wisdom? 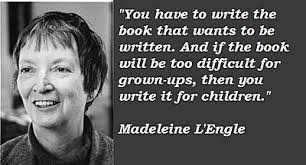 Have you ever wished you could sit down with some authors from the past, you know, the ones that have gone before us? Pick their brains, spend time talking with them, asking questions of how they did this or that?
Madeleine L’Engle said, “You have to write the book that wants to be written. And if the book will be too difficult for grown-ups, then you write it for children." Madeleine L'Engle was an American writer who wrote young adult fiction, including A Wrinkle in Time and its sequels: A Wind in the Door, A Swiftly Tilting Planet, Many Waters and An Acceptable Time.
I like her advice, mainly because sometimes when we are writing it seems we are trying to put a story in a genre, and it just doesn’t fit. Have you ever found yourself in that situation? Obviously at some point in her writing journey Madeline did or she wouldn’t have given that advice. With over 60 books written, she obviously has given us sound guidance. By the way, many of her papers are at Wheaton College in Illinois. So, I would like to sit down with her and discuss many things but especially when do you make that decision to change your direction.
Now one may wonder what Harper Lee’s advice could be, since she wrote one book and it was a long time until the next. But she said, “Any writer worth his salt writes to please himself... It's a self-exploratory operation that is endless. An exorcism of not necessarily his demon, but of his divine discontent.” As we all know she wrote To Kill A Mocking Bird. I would like to sit down and ask her what was in the back of her mind when she was writing this book. I would like to know when she finished and after it was made into a movie and after many years of not publishing, what were her thoughts after it was made into a movie. Was she happy with it? Did she wish she had changed any of the book? 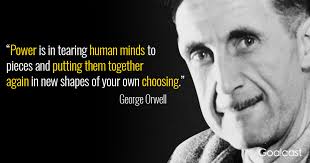 Another author, George Orwell said, “Writing a book is a horrible, exhausting struggle, like a long bout with some painful illness. One would never undertake such a thing if one were not driven on by some demon whom one can neither resist nor understand.” His real name was Eric Arthur Blair, writing under the pen name George Orwell. He was an English novelist, essayist, journalist, and critic. He also said, He who controls the past controls the future. Who controls the present controls the past.” One can’t help but wonder after reading his books, where that quote came from. He wrote such books as Nineteen Eighty-Four, Animal Farm, Down and Out in Paris and London, The Road to Wigan Pier, Homage to Catalonia and Burmese Days.

His quote about writing a book is depressing and I want to ask him, why did you write if you were that miserable and in pain? I can honestly say I have never heard an author say that about writing.

We could ask them, why they think their stories resonated with readers? What would they do different? What was the one technique they fill helped them more than any other?